The contents of this Forum are created by selected authors, like Wikipedia.
Stay informed! Don't let yourself be fooled!

VIENNA in AUSTRIA, right in the heart of Europe, is a beautiful city!Very clean, very safe.
But we are not a country of the blessed!


The perpetrators often act very brutally:
A young man, 21 years, from a poorer EU country, came to Vienna and struck with an iron bar several women.
Conclusion:
A woman has lost her eye!
Another is now handicapped!
And a victim was only 13 years young!
He gets life (10-20 years) for five times attempted murder.
And what does the Austrian Government? Do they raise the security controls? No!
...
Car thief, from poorer EU country, endangers passers-by and police during the murderous escape!
...
Drug refugee kills sister with knife in station!
...
Brutal mafia murder in Vienna's city center!
...
No police protection for witness in drug process, so she was executed in Salzburg / Austria!
...
Drug refugee injured policeman heavy!
...
2018 April:
Vienna: 10 refugees hit out soldiers tooth and rob his cell phone and military bag!
...
2018 January:
Taxi driver rapes young girls!
...
2017 March:
Taxi driver mows down family!
...
New Year's Eve 2017 in Vienna
9 refugees rape tourist!
...
2016:
Refugee cuts woman's face!
...
March 31, 2015:
Two persons from a poorer EU country have raided older woman! Now, she is a nursing case!

Watch out in the subways: when the compartments becoming more and more empty woman are raped!


Man dies in front of hospital in Vienna. Receptionist said: "Our doctors are not allowed to leave the hospital!"


Hundreds of jihadists return from Syria ISIS war to Austria!


Balkan war in Vienna with 250 persons from the former Yugoslavia!


Gunfight between 9 persons from the former USSR in Vienna!
Welcome to Vienna! Please don't forget the protection vest! ;-)


Terror attack at Vienna Airport?
Technician fired, because of his sympathy for the IS!


Young, male refugees went to a hospital in Vienna and robbed sleeping female patients! They were reported and sent to their quarters!


We have pickpockets -caution with subways and crowds- currency exchange scammers and con artists posing as police officers, which steal your money and passport!
Now, on March 31, 2015, fake police have again taken away money from tourists! The false police claimed, that money would be counterfeit money!
Emergency Police: 133, Ambulance: 144, Firefighters: 122, EU Emergency: 112
The true police are very helpful!

Police says: "Because of the many illegals, we have no time for our normal work." Note: in the past, the army has monitored the borders, but because of the reckless economic driving and power-crazed EU, no one is allowed to monitor the borders!


Vienna: Several persons with Kippa beaten by a Muslim.


Don't travel alone at night, better you stay at the hotel!
Don't move into dark side streets! We had gangs shootout, hand grenade attacks, half dead battered women, because of a few Euros!
ADDITION: Unfortunately, a woman was already at 08:50am in the morning for her money bashed bloody. She needed hospital and was very traumatized! 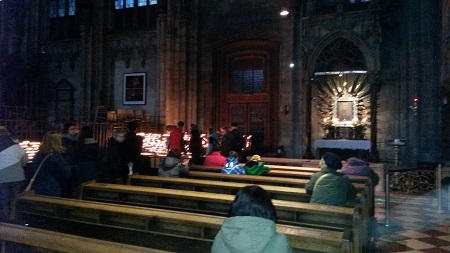 Austria is still the last paradise for smokers.
Smokers have the right to smoke almost everywhere. In cafes, restaurants, near children, in front of cinema and theater entrances.


Woman pushed to underground/subway rails (in Berlin hair set on fire) - hint: stand with your back to the wall and observe the surroundings.
Carry money on your belly, because you get robbed in the crowd without realizing it!
Keep one hand on your case, because you're involved in a conversation and another criminal robs your suitcase!
Because of the terror in France, the police presence is increased (but certainly for a short term, because the government in Vienna, but also in Berlin has thousands of policemen axed! In Germany now threatens a recruitment problem!).


Cyclists ride too fast and reckless. There are always severe accidents with passersby. The cyclists remain unrepentant.
And car drivers often do NOT stop at the crosswalk!


Please watch out for the beggars mafia and jewelry stores, which are very often raided!
New trick: Man, woman, child finds gold ring with gold stamp. For a small donation, the ring is yours. But this ring is made ​​of brass and so completely valueless!


In Austria, the feces of cooks is no longer checked for tapeworms.
In London, some jewish families received tapeworms by their employees, who has come from high-risk countries for tapeworms!


Economic crisis, even in 2015! Everything gets stolen: cell phones, cameras, wallets, bicycles, everything made of copper, even buggies and school books!


The megalomaniac and unrealistic EU wants open borders. But in some EU countries earned a student just about EUR 400,-! In Austria over 1.500,-!
The criminals from poorer EU countries have nothing to lose but their lives! In addition, the penalties are very low.
The crime is rising! The number of victims is rising! The hatred of foreigners, even of the hard-working, is rising!

Arrogant Viennese politicians:
No parking permit for doctors! Policy (Social and Green party): Doctors have to use taxi, or public transport!
Dear guests, please don't fret, if the doctor takes longer to come for you, he first needs to call a taxi!
Please be gentle! Trainees in hospitals must work for 0,- Euro as a full-time worker! Thank you!
...
AKH:
Because too many people visit for every little thing the AKH - very famous university hospital - and not the resident doctors, the AKH have massively to economize. In the morning, all levels were closed due to protests of the staff!
Acute patient has to wait for lifesaving heart surgery 4 weeks!
...
West Nile Virus in Vienna: Like flu. Passes after 4 weeks. Patient thereafter immune. Blood donations forbidden!


Guest from poorer EU country in Austria pursues, insults and claims money from passers-by. And knocks down a policeman.


Man looks for asylum in Austria. Marries Austrian. Deals in drugs. Rages during deportation. Will flee. Injures policeman. They call another 2 man for reinforcement. 3 of 4 policemen confess to have used violence and pay him EUR 100.000,-. These 3 policemen get discharged. Now, this former drug dealer wants another EUR 380.000,- and a monthly pension of EUR 1.000,-.


Crime in Vienna increased by 5.82% from 2011 to 2013.
1000 police officers are injured each year in Austria.
Female robber hit woman's face for smartphone on escalator.
Avoid drunken men, or they will jump on your head (happend after the Life Ball 2015)!

Now, well prepared by us, we wish you a good stay in Vienna!
And don't forget: Vienna is still one of the safest major cities in the world!
The Viennese are very helpful! But exactly therefore: TRUST NOBODY!


July 2015:
July 5th 2015, Sunday morning: man, from outside the EU, shoots rival in the buttocks and an uninvolved boy in the stomach! The boy is doing fine again!
...
Refugee hires IS fighters.
...
IS followers in the Austrian army in Vienna!
...
June 2015:
June 21st 2015, Sunday morning: man, from outside the EU, shoots out of the car again and again at his brother. Tracked and shoots at him. Victim remains seriously injured.
...
First IS terrorist attack in Austria!
On June 20th 2015 in Graz.
Man kills with car and knife 3 people, including a boy who was only 4 years young and injured 34 heavy!
...
May 2015:
Shooting in tramway, in Vienna: an asylum seeker kills man and injured uninvolved 19 year young female hard!
...
March 2015:

Caution in the subway. Sleeping passengers are robbed by gangs.


Subway: Man bumps into woman. Grinning at her face. She complains. He insults and strangles her. Passenger helps her. Woman exits, man follows her and spits at her.


Man, from outside the EU, shots in the middle of the street his brother in head.


Salzburg: Man, from outside the EU, kills judge with explosive trap.

Man, double murderer, from outside the EU, is released after 24 years in prison, after burglary in beauty shop, he has a gunfight with police and then he even wanted to throw a hand grenade.

Improvement
This page should lead to a better security policy in Vienna, but also throughout Austria!

Public transport
The drivers are sometimes not very customer-friendly:
Blind woman was simply thrown out at construction area without further informations!
Please note: all dogs need muzzle and leash! Woman was thrown out of the bus, because the Chihuahua in her bag had no muzzle!
...
TICKETS Metro
8-day-ticket Vienna (until one o'clock a.m. next day)
24-, 48-, 72-h Vienna ticket
...
Timetable information
Use Quando (Homepage Google-translated! App only in German!)


Mobile Phone Network
We recommend "HOT", only available at the grocer shops "Hofer". There you get a SIM card for EUR 1.99. Buy Credits and you can phone and browse in Austria without roaming costs! HOT Homepage Google-translated!

LIFE BALL only in Vienna, every year: "Great show! Great weather! Many international guests! Again a great success! We have EUR 40.- donated! Unfortunately, the ORF has moderated into the show and we were able to hear the male moderator drooling during the naked models were shown; also a close-up on the bare breasts could be called a denigration of women to a particular part of the body! And a show should not do advertising for cigarettes and weapons!"

ATOM PEACE in Vienna with the Iran!


We are here to help YOU!

diese Seite auf Deutsch /
this side in German